TDoS: An attack on VoIP systems 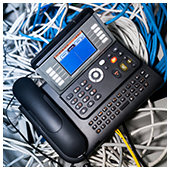 Denial-of-service (DoS) attacks are nothing new. But most businesses have no idea how to prevent this type of attack on their Voice over Internet Protocol (VoIP) system. If you’re one of those businesses, we have everything you need to know right here.

The end goal of any DoS attack is to overwhelm a system with so many requests that the system is eventually forced to shut down. Telephony DoS (TDoS) attack is a subcategory leveled at VoIP systems. Alarmingly, this attack is commonly used against hospitals and 911 phone lines. Much like ransomware, some TDoS attackers even demand a ransom to halt the attack. They take advantage of cryptocurrencies and caller-ID spoofing to make it incredibly difficult to identify attackers.

TDoS attacks generally employ fewer resources than the DoS attacks that are designed to cripple IT systems such as networks, servers, and software. At its most basic, all that a TDoS attack requires is an automated phone dialer that calls a target phone number and hangs up — over and over. That very simple strategy can stop anyone else from getting through the line.

What organizations need to do

Counterintuitive as it might sound, locking down your VoIP system with complicated and unnecessary security measures will ultimately do more harm than good. Most businesses can’t operate if they can’t communicate with their customers.

Although VoIP may be a digital resource similar to your other IT systems, the very nature of phone lines makes it impossible to hide them behind firewalls and other protections. However, there are new solutions that offer protection to VoIP systems. There are now new security protocols that can protect your communication infrastructure against those who try to use force to gain access to your directory information. These protocols can also identify, reroute, and filter calls coming from known attackers.

If you’re experiencing any abnormalities with your VoIP system, or if you want to deploy the most up-to-date solution that the market has to offer, our expert staff is ready to help you at the drop of a hat — just call today.