Better virtualization options on the way 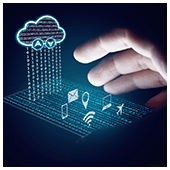 The virtualization market is dominated by two vendors: Amazon Web Services and VMware. Both have the largest market share in their respective fields, the former in cloud-based solutions and the latter in on-premises virtualization. Now, those two platforms are compatible with each other.

Traditional servers and desktops use computer hardware inefficiently. Their multitasking capabilities are limited and a lot of computing power is wasted on unnecessary tasks. Virtualization software alleviates these problems by splitting one physical server into smaller virtual machines so power is more evenly distributed.

For example, if you need your server to handle both an in-house database and an online service, you might want to limit the resources it devotes to the in-house database so your customer-facing website never lacks capacity. Or, you might want to create 10 virtual desktops on your server so employees can access their work from cheap workstations with little more than an internet connection.

On premises vs. the cloud

There are countless ways you can use virtualization to make your IT more efficient, but only two options for implementing the infrastructure it is based on. You can either virtualize servers directly connected to your local network, or you can virtualize cloud-based servers that you connect to via the internet.

VMware is the most popular choice for virtualizing on-premises servers. It requires a bigger upfront investment in hardware and IT maintenance than cloud-virtualized servers require, but gives you more control over how everything is set up and secured.

Amazon Web Services (AWS) is the most popular choice for cloud-based virtualization because it is simple and affordable.

In the early days, moving from on-premises virtualization to the cloud meant rebuilding the entire setup from the ground up. Fortunately, AWS announced last year that VMware users would be able to essentially copy and paste their on-premises (virtualization) servers to the cloud. That upgrade finally became available to users in August 2017.

This new partnership is great news for VMware users. If your business has a local virtualized server, it can be configured to automatically move to the cloud when your office is damaged or without power. When handled properly, customers and remote employees can continue to access your servers without any interruption of service.

So in addition to significantly reducing hardware expenses, virtualization improves business continuity. To get the most out of this technology in your office, give us a call today.